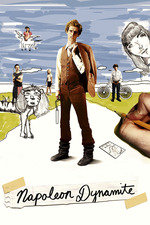 I know. I cannot believe it either! Napoleon Dynamite was such a rich and enthralling experience. My previous experience of the film was hazy but what was for sure was that I felt it was dull and unappealing due to its deadpan characters and lack of real plot, but coming back to this with a more mature and aware mindset, I was able to find the gems behind the film's supposed cracks.

The first aspect that strikes me in Napoleon Dynamite was its deadpan and awkward humour. I found it to be so damn effective as it shows that the film and its director, Jared Hess, was willing to take risks, and not only that, the humour actually lands around 98% of the time. The humour transcends through its unpredictability during moments of quietness and the subtle mannerisms and reaction from its characters, supported by the film's fantastic cast. Without the cast, especially Jon Heder, this film would have probably fallen apart. Heder provides such commitment to a role that requires both to be sympathised and ridiculed; the same goes for Efren Ramirez, who plays the awkward and soft spoken Pedro.

The film certainly walks a difficult rope as it tries to mix sympathy with comedy, which usually does not go hand in hand; comedy, in most cases, works because we are given the opportunity to view the misfortunes of others and those films does not judge us for doing so. We laugh at Napoleon Dynamite and his side kick Pedro because the director and his co-writer, also wife, Jerusha Hess, wants to mask the true melancholia of his socially different lifestyle. It certainly is not easy for the audience to empathise the character's fascination for magical beasts and nunchucks but it is, however, easy to identify with Napoleon’s feelings and that helped carried me through this film smoothly.

It is easy to view Napoleon Dynamite strictly by the shape and texture in its surface, but there is actually more to the film than it seems. I actually found it to be a tender and at times, melancholy, exploration of individuals that many consider to be socially awkward and isolated. It certainly sounds like something that has been repeatedly covered in American coming of age movies for generations, as it is still a raging problem today, but what the film does present us is not a sugar-coated reflection of these fascinating individuals but instead the eccentric sides of them, allowing them to seem more deviated from the normal social line. Napoleon Dynamite shows us that these socially distant figures are still one of us, and still goes through the same issues as any other person; showing us Napoleon's difficulty to find friends, love, family, equality, acceptance, artistic expression, compassion, support, and a career. Though the film's title makes it seem like this film would centrally follow the titular character, the film surprisingly quite a bit of time on other important members of his life, and the film does not treat them as shallow supporting players that would fill the comedic gaps, they too are treated with the same amount of respect and depth as the film's central figure.

Napoleon Dynamite is known for that particular independent sense of style, down to the music and cinematography, and I found it to be thoroughly effective. Though the film sometimes borrow the dead-on centre and emotionally distant photography from Wes Anderson, I was still able to get on board with it, as the film does not rip off or borrow for the sake of being cinematically intelligent; the style that Hess and his cinematographer was going for was actually appropriate to the characters that the film is following, the type of situations that they get into, and the humour and hollow tone that Hess shaped in the film's atmosphere. Napoleon Dynamite may work at a visual level, but it never reached to the level that the film had to offer sonically. During the very few moments that the film expresses in music, I was left at awe by its excellent choices of tracks and the timing that was delivered with it. Whilst going through the film's title sequence, I was found bobbing my head to the beautiful and soft-hearted track by The White Stripes, "We're Going to Be Friends"; the same goes for its final track, The Promise, by When in Rome, leaving me with a genuine grin.

Napoleon Dynamite delivers effectively in its quirky characters and humour, while also achieving to craft ideas and layers behind it, making it more than just simple laugh-out-loud comedy. I never thought I would ever utter these words.... Napoleon Dynamite is perfection.