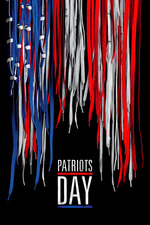 The 2013 Boston Bombing was an event that affected me thousands of kilometres away, attending to my duties at work while catching a glimpse of the tragedy on one of my patient’s bedside television. Mind you, the effect that I felt was nothing in comparison to the personal trauma that was inflicted on those locally, the citizens of the city that intimately witnessed or felt the impact of the explosions, to watch and live the aftermath unfolding before them; to feel the fear, paranoia, and anger that crashed the heads and hearts of those that personally endured through the tragedy’s wake.

Peter Berg is not a filmmaker whose work I know abundantly of, but I have seen a number of his films to understand the suitability of his position to adapt this particular story. Given a number of his films touch on historical based events, his ability to dramatise them have rarely ever showed significant fault, realising the essence of the narrative’s point, painting characters that are richer than the plain stock figures that you would find from another filmmaker, and creating a striking balance that would allow his films to be universally appealing, attracting and gripping multiple sections of society, promising them the entertainment and thoughtful filmmaking that his type of films aspire to.

Patriots Day is a film that certainly pays respect to the event that it is based on, translating the damage, pain, and suffering that defined that moment in America’s history, taking the perspectives of those who were victimised, both directly and indirectly. Berg succeeds in wrapping the audience in the conditions and emotions that were felt during the explosion and the aftermath, utilising different methods to capture the aura that surrounded the peak of its tragedy, almost as if we ourselves were present in the space, seeing the heartbreaking violence, isolation, and confusion that the victims and bystanders had endured; I found myself unable to hold back tears as it all unfolds, grasping me in a manner that is certainly surprising given my expectations of seeing the film purely from an objective and distant point of view, I did not know Berg had it in him to sink me in the environment and accurately reflect the tragedy in a personal manner.

As the film progresses forward, the manhunt for those responsible becomes the story’s chief priority, which from there the film could have easily become an urgent thriller that would have exhilarated the audience in the same respects that Michael Bay did in his depiction of its historical source in 13 Hours: The Secret Soldiers of Benghazi. Instead, Berg decided to not stray too much from the human and humble aspect that defined its first half, one that still manages to pay respect to the victims and Boston community by emphasising the strengths they demonstrated in apprehending these men, conveying the passion that the local community has to ensure each other’s safety. It also helps that its antagonists are portrayed in a way that shows more layers to their intentions than I had expected, revealing a glimpse of the emotional undercurrent that had led them to do such a thing and what they could have felt during the aftermath of the event. It may just simply be a complete dramatisation of the truth, but it is one that carries enough emotional charge that it felt like we were watching real characters.

Sure, the film could have strived a little more in its thematic composition and allowed its characters to convey more depth than what they were left with, and the cinematography at times possesses way too much kinetic energy for one to completely absorb the scene, sometimes leaving an audience member disorientated geographically. However, these are minor quibbles that should not detract the audience from being entertained and engaged by this film.

What Did the Lady Forget?