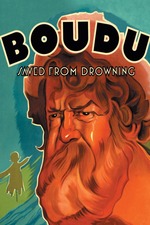 Michel Simon plays a “tramp” who attempts to end his own life by jumping into a river. His plans are thwarted when he is rescued by a middle-aged bookseller, who then feels responsible for helping “the poor wretch”, and so, invites him to stay at his home, with somewhat disastrous results.

This is described as a satire of the middle class, so I expected the tramp to shine a light on how ridiculous his benefactors were, perhaps by living a simple, unassuming life in comparison to their more hectic/pretentious (and less meaningful?) ones. But this is not at all the case. The tramp is vulgar and disgusting, ungrateful and entitled, and his hosts are... just average Parisians I guess? (And nice enough to let him stick around until he wipes shoe polish all over the silk comforter and spits loogies into a beloved book.) I guess the comedy is supposed to revolve around misguided people who believe they can change a whole man by buying him a new suit and paying for him to get a shave. Hardly a scathing indictment (and not particularly funny, either).

In any case, I found the film engaging enough until it crossed a personal line. I don’t care how old a movie is; implying that a woman enjoys being raped is always going to lose some points from me. I’m sure it was meant to be funny, like maybe this proper lady could never admit to wanting “Neanderthal” dick, but once she had it (forced upon her) it unleashed this wild desire in her for more. (No, no, NO. Men deciding what women secretly want has never been funny, and in fact, has always been a problem.)

The ending went a *little* ways towards making up for some of my exasperation, because I thought it was clever to have the tramp adventitiously escape his new life by falling into a river, and changing out of his wet clothes into those of a scarecrow (who more closely resembled how he dressed in his former life.) But I do think Renoir missed a great opportunity to have Boudu’s scraggly black dog reappear at his side - whose running away precipitated all of events that followed - thus bringing the story full circle. (Too bad.)