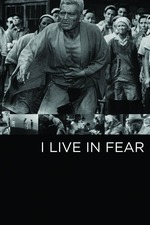 I Live in Fear

"Everybody has to die, but I won't be murdered!"

I admit there's something sort of amusing about Kurosawa's most underrated film be about a man declared crazy because he just want to move to São Paulo.

The international title isn't very good actually (the japanese "Record of a Human Being" feels better) this isn't a film about paranoia, but lucidity. Kurosawa's obvious irony is that Mifune patriarch is the only sane person in an unsane world. One mediated by a government whose machinery even if well-meaning is set towards forcing us to se inhumanity as natural, feels like a film relevant for today's matters far beyond the bomb. Shimura's character is the one that is under study here, the distant observer of the family fight, after one accepts the bomb everything else is equally fair game. Kurosawa charting of Mifune increasing anger is a,mong his major achievements. It is a very didactic film, whose process-oriented set-up of its case just reinforces its anger.

Also as a addendum about my discussion from yesterday, there's something fascinating about Kurosawa following up his big international success with Seven Samurai, not only with a film that in many ways is its opposite, but one so set in making clear western complicity in diminishing the horrors of Hiroshima and Nagasaki.