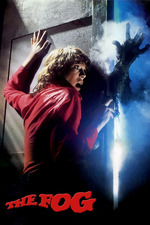 The damned place. Thematically the horror in The Fog is predicted on community guilty, a shared idea that unites people, time and space. The main character is Antonio Bay itself, a place not of sin (like most then contemporary horror), but increasing decay. Aesthetically, Carpenter runs with this idea, so while Halloween played with the notion of constant manace by way of Carpenter's precise framing, a rare horror movie that upholds a true murderous gaze, The Fog is a haunted community movie that its strategy from its title, all about filling the frame with the idea of death. Carpenter original conception didn't even included the on screen presence of the ghost pirates. The horror in Halloween was just outside the screen, the camera and Meyers one and same, in The Fog its present all the time because there's no escape the damned place. The image is rotten along with the community, characters have to come to terms with it and are allowed just walk through those dangerous spaces, it is not a movie that rushes towards its final confrontation, but just temblers at the chlling realization of its inevitability.

Guns of the Magnificent Seven