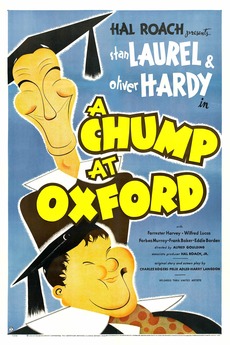 A Chump at Oxford
JustWatch

A Chump at Oxford

Figuring out a grand time for you!

The boys get jobs as a butler and maid (Stan in drag) for a dinner party. When that ends in disaster, they resort to sweeping streets and accidentally capture a bank robber. The thankful bank president sends them to Oxford to get an education. Predictable results ensue.

The Laurel and Hardy Filmography. This list does not include their solo films.

Dvd / blu ray that I own

Every Film Mentioned on Trailers from Hell

Combined filmography of every actor to play Dr. Who

Using IMDb as a reference, I've complied a list of everything I could find on Letterboxd that features at least…

Recommend me more films in the comments below!