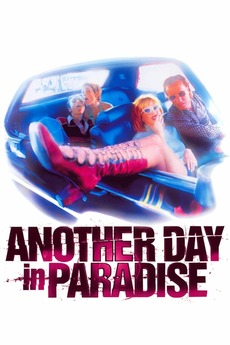 Another Day in Paradise
JustWatch

Another Day in Paradise

We live at the abyss.

A vending machine robbery by small time thief and drug addict Bobbie (Vincent Kartheiser) goes badly awry, and his friends contact street-wise thief and part-time druggie Mel (James Woods) to patch him up.Recognizing a kindred spirit, Mel befriends Bobbie and his girlfriend Rosie (Natasha Gregson Wagner), inviting them to join him and his long-suffering girlfriend Sid (Melanie Griffith) on a drug robbery which should set them up for life. The seemingly simple robbery is a great success, but the sale of the drugs afterward fails badly, and Mel and Bobbie are shot.The four take refuge with the Reverend, who charges them half of their haul from the robbery to care for them. In a desperate attempt to recover their losses, Mel involves the crew in a disastrous, ill-advised jewellery robbery, and they become caught up in a web of violence that rapidly spirals out of control.

Un altro giorno in paradiso, Another Day in Paradise - Wir leben am Abgrund

Movies with large amounts of nudity or scenes with nude celebrities