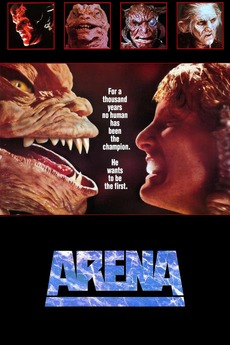 For a thousand years no human has been the champion. He wants to be the first.

An intergalactic fighting competition between champions of various worlds has traditionally been won by a species much larger and stronger than humans. Entering the contest, a human finds he has to battle against not just his opponents and his self-doubts, but the corrupt system. Far in the future, on a distant space station, the legendary Arena is where the best fighters from every planet come to vie for the championship. But for over half a century, no Earthling has been good enough to be a contender. Until out of nowhere, comes an underdog: the great human hope, Steve Armstrong... and the best anyone's ever seen. He's been training all his life for a shot at the big time, but now he's up against some mighty big muscle: a ruthless extra-terrestrial crimelord who'll pull no punches to make sure he stops Steve dead. In the mood for hard-hitting sci-fi action? Arena will knock you out!