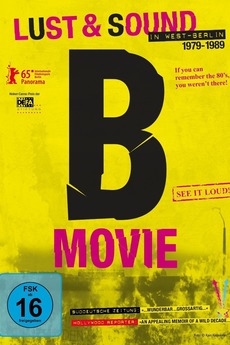 Music, art and chaos in the wild West-Berlin of the 1980s. The walled-in city became the creative melting pot for sub- and pop-culture. Before the iron curtain fell, everything and anything seemed possible. B-Movie is a fast-paced collage of mostly unreleased film and TV footage from a frenzied but creative decade, starting with punk and ending with the Love Parade, in a city where the days are short and the nights are endless. Where it was not about long-term success, but about living for the moment - the here and now.

Documentaries on a variety of bizarre, esoteric, and provocative topics. This list is inspired by the outré offerings of L.A.'s…

Punk's Not Dead: The Most Comprehensive Punk Music List on Letterboxd

Another entry in the comprehensive musical genre series, this one is every band that can be considered punk.

Sex, Drugs and the Most Comprehensive Rock List on Letterboxd

Rock music is awesome, here's another list for my comprehensive Letterboxd music list this time containing a heap of rock…

Robot Rock: The Most Comprehensive Electronic Music List on Letterboxd

Edit: Love music? Check out the Letterboxd of music: Listnd

Following on from the my comprehensive metal genre list, I…

a neverending list of every single yellow poster i can find. i'm pretty sure this is the longest list of…

the idea is to not…