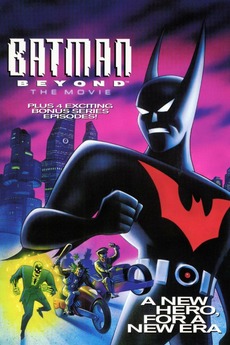 Batman Beyond: The Movie
JustWatch

Batman Beyond: The Movie

A New Hero, For A New Era

Fueled by remorse and vengeance, a high schooler named Terry McGinnis revives the role of Batman. Under supervision of an elderly Bruce Wayne, he fights crime in a harsh futuristic Gotham.

This is an unranked list of animated films based on DC comics or featuring characters from DC comics.

Films based on DC comics.

Every feature, short, and fan film that has Batman as a character or is about Batman. Excluding Batman homages (e.g.…

In honor of Matt Reeves' The Batman, I (and many of my friends) will watch every Batman movie with little…

All superhero and comic book adaptation movies that I have seen ranked.

Check out the rest of my lists on…