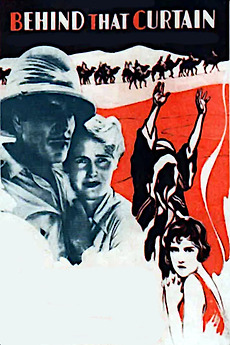 Behind That Curtain
JustWatch

Sir George hires Hillary Gatt to find out more about Eric who wants to marry Lois. Gatt is murdered and the couple, married, run off to India. Old friend John Beetham sympathizes with the bride who sees that her hubby is a liar and drunk. John and Lois fly to San Francisco. Eric shows up and tries to kill John, but Scotland Yard's Lt. Charlie Chan intervenes. Chan fans may be disappointed in this globe-trotting mystery, however, as the detective (played by Korean actor E.L. Park) only appears in a few scenes.The film is more noteworthy for its introduction of Boris Karloff to sound features, in a small role as a servant from Sudan who mutters inscrutable nonsense about the whims of the desert.

The first 30 films each have less than 800 views, victims of undeserved obscurity, watch them all.

FILM SERIES FOR THE MASSES

Cloned from this guy letterboxd.com/johnch/. Thank him for creating this list, he has done an awesome job, I would like…

Every narrative feature film by every Best Director Oscar nominee

Excludes documentaries, short films (that includes when directors are part of anthologies), limited series, filmed plays, most student films, and…