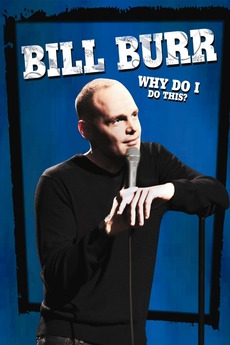 Bill Burr: Why Do I Do This?
JustWatch

Bill Burr: Why Do I Do This?

One of America's fastest-rising comedians, Bill Burr wields his razor-sharp wit with rare skill. In this brand-new stand-up performance, Bill takes aim at the stuff that drives us crazy, political correctness gone haywire, and girlfriends, or as he calls them: relentless psycho robots. A keenly observant social commentator, Bill Burr is also one of the funniest voices in comedy today.

Every Stand-Up Special I Can Remember Watching

Just a list of stuff I've seen regardless of if it's good or shit.

All Stand-up Comedies I’ve watched.. Ranked them based on which are funnier in my opinion.. I’m always looking for new…

A list of all the stand-up specials i saw. If you want feel free to leave suggestions.