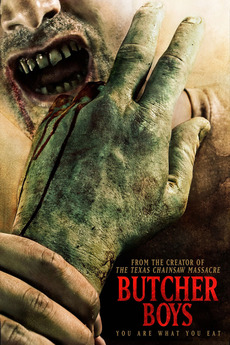 You are what you eat

A gut-wrenching, non-stop roller coaster ride through the hellish underbelly of inner-city America. A birthday celebration at an upscale restaurant sets in motion events that bring Sissy, her brother, Mikey, and friends, Kenny and Barbie, face to face with the macabre world of the Boneboys. Inspired by Jonathan Swift's cannibalistic tale A Modest Proposal, the Boneboys are international predators who deal in human flesh - dead or alive. Their hunting grounds are the cities of the world.

Butcher Boys - You Are What You Eat, Bone Boys

Films that are considered to be gory that I will be watching and reviewing on my Youtube channel: TheGoreGuide youtube.com/channel/UCJbscZzRk9z1y73Hfp4Vc3g…

Slashers and films that have slashing in them from 2000-2020

Slasher films or films with slasher elements from the year 2000-2020 not in any particular order! This is still a…

"Cannibalism is always 'symbolic' even when it is real" - Marshall Sahlins. Attempting a comprehensive list of films featuring cannibalism.…

It's a Horror thing

The good, the bad, and the downright ugly. A list of (most of) the horror films I've watched.