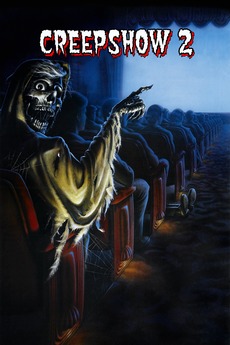 When the curtain goes up, the terror begins.

EC Comics-inspired weirdness returns with three tales. In the first, a wooden statue of a Native American comes to life...to exact vengeance on the murderer of his elderly owners. In the second, four teens are stranded on a raft on a lake with a blob that is hungry. And in the third, a hit and run woman is terrorized by the hitchhiker she accidentally killed...or did she really kill him?

Hooptober Se7en: We Have Such Masked Socially Distanced Indoor Sights to Show You

Laaaadies and Gentlemen, from the birthplace of Gene Kelly, George Benson, Charles Grodin, Greg Nicotero and Mark Cuban, This is…

Hooptober Se7en: What’s inside the box?

A very good friend reminded me Cinemonster’s annual Hooptober is everything that is right about Letterboxd. As long as we…

Hooptober VII: The Scourge of the Reusable Shopping Bag Full of VHS Tapes

This is my 4th Hooptober. I've decided that I'm tired of waiting year round for the list to drop and…