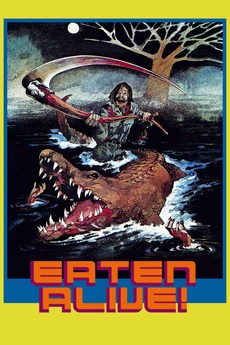 Meet the maniac & his friend

A psychotic redneck who owns a dilapidated hotel in the backwater swamps of Louisiana kills various people who upset him or his business, and he feeds their bodies to a large crocodile that he keeps as a pet in the swamp beside his hotel.

*In the Shadow of the Guillotine stands in for the full Fantômas serial *The Godfather: Part II stands in…

continually spinning out autumn wheels and unresolved october atmosphere with some meandering list-making, but, of course, given the subject, it's…

Hey there, Fright Fans! After being motivated and inspired by Letterboxd users Cinemonster and kynky, The Podcast Macabre crew decided…