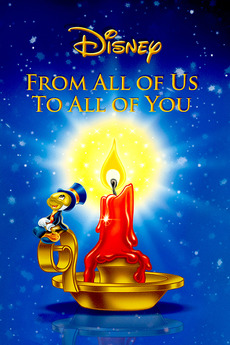 From All of Us to All of You
JustWatch

From All of Us to All of You

Hosted by Jiminy Cricket along with Mickey Mouse and Tinker Bell, this special combines newly produced animation with clips from vintage animated Disney shorts and feature films, presented to the viewer as «Christmas cards» from the various characters starring in each one. «From All of Us to All of You» is an animated television Christmas special, produced by Walt Disney Productions and first presented on December 19, 1958 on ABC as part of the Walt Disney Presents anthology series. The show has been shown infrequently in the US in recent years, but in the Nordic countries (Norway, Finland, Denmark, Sweden and Iceland) the show has been broadcast every year since 1959, and has become a holiday classic.

All the Christmas movies! *updated with the 2020 movies*

Every Christmas Film That I Can Find

Apparently there is no option to make this list visible to just one other user, so this useless list of…

Never ending list of Christmas and wintertime movies from any country.

Movies set at, around, or that have a scene at Christmas. Also some New Years movies:)