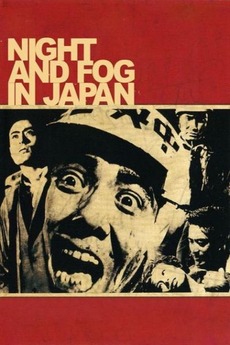 Night and Fog in Japan
JustWatch

Night and Fog in Japan

Nagisa Oshima’s most personal film is a reflection by the director on his own disillusionment with the revolutionary student movement of the 1950s and the failure of political radicalism. Taking its title (as a reference or homage) from Alain Resnais’ pivotal 1956 documentary Nuit et Brouillard, the film has a group of former student revolutionaries who meet again years later at the wedding of one of their classmates. Old feelings, rivalries and grudges gradually erupt to the surface as the one-time friends recall the various treacheries by which their cause was defeated. Cutting between times past and the present, and unfolding the action from each of his characters viewpoints, Oshima creates an abstract and yet engrossing study of passions past and principles eroded. —Yume Pictures

Films with a Marxist, pro-labor, proletariat, pro-union, feminist, anti-capitalist, anti-fascist, anti-colonial or social justice creed. Everything from social-realist cinema to…

Updated on 6/17/2021 - A list, arranged in order of original release, of all films associated with the Criterion Collection,…

Updated through the announcement August 2021 releases.

This list includes: • All films released on physical media (laserdisc, DVD, and…

Unrestricted, just anything Japanese you can find on Letterboxd (including tv series), updated constantly, in reverse chronological order.