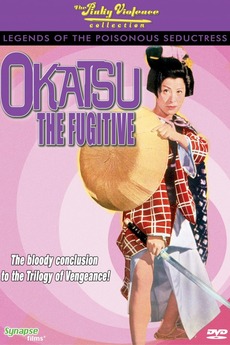 Okatsu the Fugitive is the third film in the "Ohyaku/Okatsu" series. Okatsu; a "tomboy" who is good with a sword. Her father has found her a man to marry and actually she doesn't seem too upset about the situation. At the same time, a bunch of farmers are being slaughtered by a corrupt group running a tobacco smuggling ring. They're being investigated by a man who is documenting their crimes and when they find out about it, they torture him for information but get none. It's not long before he and Okatsu's mother wind up dead and she sets out for revenge.

The Very Best in Pink – The Japanese Way...

unseen and unacquired (films to find)

Films to find and watch.

I have a 4tb hard drive that I'm trying to fill.

All Pinky Violence films listed in the Infini-Tropolis intro written by KamuiX.