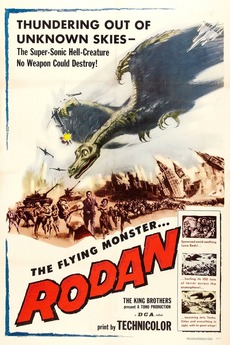 Born from a volcanic crater, the crimson monster bird Rodan tramples the Earth

Mining engineer Shigeru investigates the disappearance and death of his fellow coworkers when prehistoric nymphs are discovered emerging from the mines. After an attack on the local village, Shigeru heads deeper into the mines only to make a more horrifying discovery in the form a prehistoric flying creature. Soon a second monster appears as the two converge in Fukuoka.