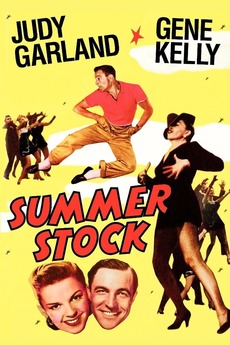 MGM brings on the show with music - dancing - Technicolor

To Jane Falbury's New England farm comes a troup of actors to put up a show, invited by Jane's sister. At first reluctant she has them do farm chores in exchange for food. Her reluctance becomes attraction when she falls in love with the director, Joe, who happens to be her sister's fiance.

now with a WHITE BORDERS edition !!