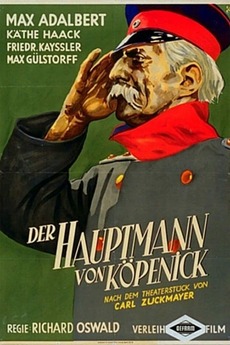 The Captain from Köpenick
JustWatch

The Captain from Köpenick

Based on the true story of a cobbler who bought a second-hand captain's uniform, assumed command of a troop of guardsmen, declared the town of Köpenick under military law, arrested the mayor and confiscated the town treasury.

All films premiered before January 30, 1933, with the exception of "The Testament of Dr. Mabuse".

In honor of the Berlinale 2018 I thought to put a List together, which has every Movie, that takes place…

Here's a complete list of every German film discussed in Siegfried Kracauer's From Caligari to Hitler. Original German titles and…