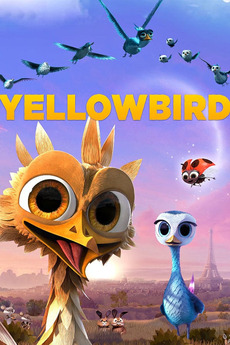 ...Ready for take off

Yellowbird lives in the ruins of an old house. He lacks the confidence to leave his home, no matter how much Bug, his labybird friend, tries to convince him to go out into the world. Attempts to toughen him up have had little success, so Bug seizes an opportunity that leaves Yellowbird unexpectedly finding himself the new leader of the flock that is migrating to Africa. Still, lacking faith in his own abilities and with danger and imminent failure lurking around every corner, our feathered hero is forced to either find the strength required to work with the team or bow out and stay hidden away forever.

It’s been a while since I’ve made a letterboxd list, so here’s a list idea I’ve been sleeping on; A…

A list of all the films I have seen that were in French, not necessarily from France tho. As always,…

Films I submitted to TMDb

All my trips to the cinema

For those more adventurous, those who prefer to see taste evolve in one single list, here's every single film I've…

What's on Netflix US

Literally just a list of movies available on Netflix. Sorted alphabetically. Disclaimer: I have no effective way of tracking what…