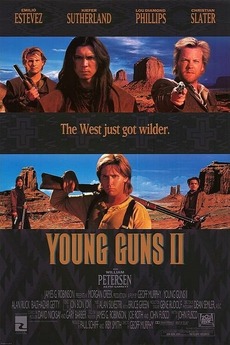 Three of the original five "young guns" — Billy the Kid (Emilio Estevez), Jose Chavez y Chavez (Lou Diamond Phillips), and Doc Scurlock (Kiefer Sutherland) — return in Young Guns, Part 2, which is the story of Billy the Kid and his race to safety in Old Mexico while being trailed by a group of government agents led by Pat Garrett.

bold yellow titles with a not too weird font. most, if not all text has to be yellow. no cursive,…

After 19 weeks and thousands of nominations and suggestions the Underrated series is finally over. Thanks to everybody who has…

If I missed any, let me know. When you get lost in such a wonderful discussion, it's easy to miss…