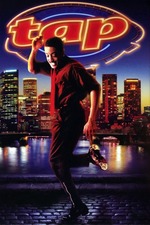 Quickie Review
Gregory Hines has a dream of making it big and it'll take a single step in this predictable but still entertaining musical drama scripted and helmed by the director of The Last Starfighter, The Boy Who Could Fly, Dennis The Menace and Major Payne. Hines plays Max Washington, a burglar recently released from prison who's trying to get back on his feet and the only way to do that is to use the tap dance skills that kept him sane while behind bars and an old friend, Little Mo (Sammy Davis Jr., in his final screen performance), encourages him to join a dance show that he's creating, even though Max has a bigger dream of dancing on Broadway. However, when Max's old criminal cohorts come forward with an opportunity to rob big money, will he take them up on their offer or will he live to his own beat and go for his dreams? Parts of the plot itself is predictable and a little lightweight but what makes it entertaining nonetheless is that it's a loving and energetic tribute to the art form of tap dancing and the fact that they got talent who are actual dancers gives the film its authenticity. Aside from Hines, you have Howard "Sandman" Simms, Jimmy Slyde, Harold Nicholas, Arthur Duncan, Bunny Briggs & Steve Condos and they all appear in a memorable tap challenge sequence. There's also a ton of fantastical and spectacular dance sequences as well, including the climactic dance sequence that makes use of a technology called "Tap-Tronics", where a dance is timed with a electronic beat. So while most of the plot is a lightweight, everything else about Tap will have you dancing along and will either make you gain a greater respect for tap dancing or learn more about it. Once you see it, you won't escape the rhythm.