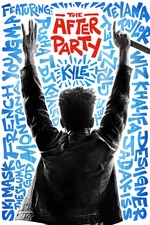 Quickie Review
The first movie produced by WorldStar Hip-Hop (the same people behind all those funny and shocking viral videos you love so much and their hip-hop coverage), this Netflix film follows aspiring rapper Owen (real-life rap star KYLE), who is looking to bounce back from a embarrassing moment that made him go viral for all the wrong reasons so he and his best friend/manager Jeff (Harrison Holzer) look to set things right by going to a big party and getting to the party and being at the party is where the fun and madness begins. The film is like a modern-day Who’s The Man because it has a who’s who of hip-hop including French Montana, Wiz Khalifa, Jadakiss, Teyana Taylor, DMX, Young M.A., Pusha T, DJ Khaled, Desiigner, Ski Mask, The Slump God & more. The film itself is a little predictable and the jokes don’t always land but it does have big laughs when possible. KYLE & Holzer are a good team while Shelley Hennig (“Teen Wolf”) is a good foil for the two as Jeff’s sister and Owen’s love interest. The After Party is a decent time killer for Netflix subscribers, even if it’s predictable.

Power of Grayskull: The Definitive History of He-Man…