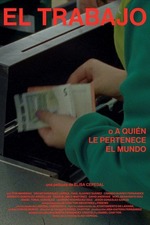 Work (or To Whom Does the World Belong)

The dystopian reality of the modern-day working class is unpacked in Elisa Cepedal’s second feature, which recounts the history of the miners’ strikes in Asturias in the 1930s—which were violently suppressed by Franco’s military just two years before the start of the Spanish Civil War—alongside images of everyday life in the present: at supermarkets, classrooms, bingo halls, car repair shops, churrerías, and cinemas. A powerful work of montage that places the plight of Spanish labor in the first half of the 20th century in fascinating and at times jarring juxtaposition with our own fraught contemporary moment, Work, or… is a compact yet robust political documentary and a stirring call to action.

Art of the Real is still playing in our Virtual Cinema. Don't miss the final chance to get an All-Access Pass to exclusively view films from both weeks until December 4th! Start discovering with your All-Access Pass here!

Film at Lincoln Center is using Letterboxd to share updates and lists with their audience. Join here.

Those That, at a Distance, Resemble Another