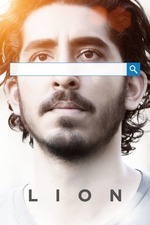 I like Dev Patel, he comes across as a humble, very easy going kind of guy. I just don't rate him much as an actor. As much as he tries to, he cannot make Lion any better than the script allows it to be. Yes, it is a tragic story with an almost happy ending, and the fact it is a true story should mean it is more impacting, alas it isn't.

It's quite cumbersome to begin with, and takes some time to find it's footing (not sure it actually does), with clunky dialogue and some hammy stuff from Nicole Kidman, I was rolling my eyes more than once. Rooney Mara doesn't really have anything particular to do, I really don't get the purpose of her role, maybe a nodded off at that point - I'd forgive myself if I did.

After so much praise that Iv'e read on here, I was expecting to be blown away, and moved to tears. Unfortunately it just didn't work for me. So why 3 stars? The score was excellent, really touching. The story itself, is very heartfelt, even if it isn't done justice here. And Sunny Pawar (Young Saroo ) and Abhishek Bharate (Guddu) were exceptional. It's such a shame the rest of LION isn't.