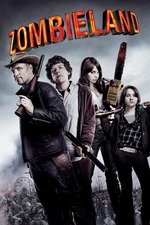 Woody Harrelson desperatly trying to find some twinkies in decrepit old stores is really all you need to make a good zombie apocalypse film.

Jesse Eisenbergs sassy attitude works since it matches Woody Harrelsons character. This film was actually my first film with Eisenberg in it and ever since I’ve him seen him in other movies I’ve thought of him as his character Columbus from this film.

The lighthearted take on a zombie apocalypse is refreshing and fun but isn’t quite as good as the (in my opinion) best zombie comedy, Shaun of The Dead. That film has witty zombie jokes from Wright that makes for some awesome moments. This film is poor on clever jokes but the cute atmophere almost makes up for it.