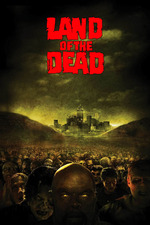 Land of the Dead

Eat the rich... sorta? Land of the Dead is built on a solid conceptual foundation, a fortified city wherein the wealthy live in a tall high rise ignoring the impoverished paints a sharp criticism of classism, but Land's social commentary is overt, dumbed down, and overly cartoonish. In the other Dead movies I've seen their social commentary is subtle maybe even subconscious but here it feels like Romero felt obligated to include a critique of modern times and make it unmistakable. When it's not being an aggressively in-your-face social commentary it's mostly forgettable. The movie primarily focuses on Riley and his gang trying to track down Cholo and the Dead Reckoning, a mobile zombie slaying machine. Not only are the cast of characters involved bland and poorly acted, but this ultimately feels like a disconnected distraction as it's too far removed from the interesting setting and tangentially related in the loosest way to thematic groundwork of Fiddler's Green and Paul Kaufman.

The Man Who Could Cheat Death