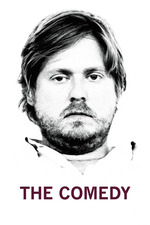 I simply do not understand the point of movies like The Comedy which expect the viewer to spend ninety-odd minutes in the company of characters who are not only insufferable, but also uninteresting.

Hey, guess what... Privileged hyper-ironic manchildren are often dead inside. They use derisive, disruptive humor as battlements to keep the precarious emotional investments of the world at bay. Does this qualify as a deep insight—or just reductive pop psychology?

Are a couple shots of Tim Heidecker looking empty and lost sitting in a boat supposed to be the viewers' payoff for sitting through his character's infantile theatrics?

I have no problem with abrasive movies if they are either formally adventurous or at least engaging in some way, but this movie is just a gnat flying around your face. That's all.

Personally, I've known a few people in my life whom I'd consider the same genus and species of asshole as Heidecker and his friends—albeit to a lesser degree—and I never wasted my time wondering if their asshole tendencies were a symptom of personal pain, anomie, or just a catastrophic failure to find meaning in their lives. I never wondered because I pretty much took that for granted.

Is ironic detachment a constructive life strategy to deal with one's environment? No. Does anyone think it is? Probably not. Likewise, few drug addicts or alcoholics imagine their vices are a gateway to real happiness so much as a deferment of pain.

I just don't have time for movies that seek to alienate viewers without offering them anything at all in exchange except intimations about babymen and their privilege that were already foregone conclusions.

Well, I guess I do have time for them—because I did—but I don't have respect for them.