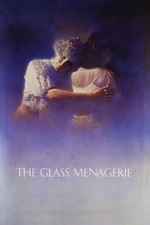 I just watched two indifferently directly film adaptations of The Glass Menagerie back to back. You probably can't ever imagine doing such a thing—at least not without the threat of grave bodily harm—but that's okay. We're all different people. Let's celebrate how mightily different we happen to be. For instance, I even temporarily joined another streaming service—one heretofore unknown to me called "Topic"—just so that I could watch this late 1980s version of Tennessee Williams' play, directed by Paul Newman. It was the final film he directed, and after watching it, I don't wonder why.

Believe me... I'm pained to speak unfavorably of Newman's talents in any context, as I am what is known in our repugnant vernacular as a "stan," but there's no denying that this adaptation is dreary, rambling, and something you diddle around on your phone to.

I vaguely remember seeing the trailer for this movie in the theater back in the day. I didn't know shit about menageries then, glass or otherwise. Now I am older and wiser, in the degraded sense of contemporary wisdom. I recall that it was more of a teaser than a trailer actually. Tiny glass animals—i.e., the eponymous menagerie—floated against a backdrop of purpling blues whilst the credits alone (PAUL NEWMAN, TENNESSEE WILLIAMS, JOANNE WOODWARD) were intended to do all the heavy lifting.

The movie thereafter fell off the face of the earth, never getting a physical media release at any time since. (Reminds me of Inchon with Laurence Olivier, Ben Gazzara, and Toshiro Mifune. Just try seeing that film. I think the studio put a hit out on everyone who ever watched it.)

But you know me. (Don't you?) Whenever there's an unseeable movie, I need to see it. It's the pea under my mattress.

So here I am, thirty-four years after the fact, watching The Glass Menagerie which is so grainy and distant—like Tennessee Williams via Zapruder—that I can't quite find my way into it. It doesn't help that most of the actors in this version don't measure up to the '73 TV movie with Katharine Hepburn (Amanda Wingfield), Sam Waterson (Tom Wingfield), Joanna Miles (Laura Wingfield), and Michael Moriarty (Jim O'Connor). Karen Allen as Laura is the only one who bests the earlier performance.

In fact, watching this one made me bump up my rating of the other one by a half-star. In the same way that I am not good at tasting the differences between wines unless I sample them one after the other, I can't properly credit a decent version of The Glass Menagerie until I watch one that just washes over me like a snowy radio signal.

I want to say one more thing though... This one goes out to all the students who are required to watch film versions of literature and plays in school and somehow feel compelled to post riveting capsule reviews on Letterboxd saying, "Boring" and "I hated it" and "I watched it for school": Nobody gives a walking, running, or flying fuck. You know, back in the paleolithic era when I was in school and I was forced to read or watch something I didn't like or understand, I generally assumed that it was I who was the moron incapable of rising to the occasion of these pillars of literary art. Not so with this generation of manic scrollers—the IDK generation—who come at everything with their mouths agape, perpetually drooling—in spirit at least—rating everything against the yardstick of their atrophied attention spans, which soon enough will be directly circuited to regular electric impulses obviating the need for any aesthetic stimulus whatsoever.

Did that sound bitter?

Sorry. I got carried away.

I mean, technically they're right. This is a pretty boring adaptation of The Glass Menagerie, but I'd like a more scholarly, nuanced appraisal than just "Boring."

"Boring" is boringer than anything you've ever been bored by.

What I want to know is whether you're bored for the right reasons...