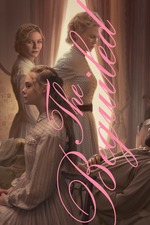 Not at all what I was expecting! This was fantastic!

Nicole Kidman and Colin Farrell’s performances were terrific, subtle but very effective. I’ve never been a big fan of Kirsten Dunst and she was just okay in this movie. All of the girls were great. There was something terrifying about seeing them all together in a certain scene towards the end, but not in a bad way.

The pacing was flawless, which is great considering how slow the film was. The relationship between Farrell’s character and every girl was clearly established in very quick, effective ways with clever dialogue mostly. Coppola built tension perfectly between the girls and then between them and the man in their home.

I’ll have to check out more of Sofia Coppola’s films.

Edit: I hate the poster tho