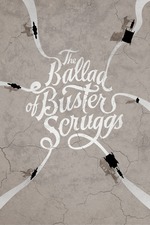 It's about death, the corruption of money, the nature of art, the progression of society, the Coens themselves, and the meaningless of it all. So, it’s a Coen Brother movie. It is engaging throughout, and mostly entertaining, even if it leaves something lacking most of the time. It's kind of impossible to view it as a whole without commenting on each sub-sect, so here's my ranking of the individual pieces, and a little blip of my feelings.

6. “Meal Ticket” - Kind of insufferable, and not in the typical Coen way. It felt long, never emotionally resonate, too intellectually simplified, and just downright boring. I didn't connect to a moment of this, and the only inspired bit was the want of a math-wiz chicken, over an emotional performer; only good in conceptualization. Definitely the most laborious, and just left me cold and frustrated, and it's interesting because I think this very well may be the one that's most about the Coen's themselves; artist slowly losing their value as the landscape widens, and individuality isn't enough, and everything is replaceable. Maybe it hit too close to home for them to approach in some sort of ambivalent objectivity (as they often find themselves doing). But also hearing Harry Melling recite the same things over and over (another nod to themselves?) could have good thematic meaning, but is a total chore to actually endure. The only segment I hated.

5. “Near Algodones” - Not bad, but ultimately unremarkable. Pan-shot! That's good. The irony of the double hanging, good as well. Frames Janco is fine in an undemanding role. The portrayal of the Native Americans here didn't seem offensive to me, being that it was reality; not all Natives were murderers, but many took upon revenge of the White oppressors who ravaged and took their land. Felt appropriate, or maybe I'm the problem - the jury is still out. But it came and went so swiftly, that I didn't even have time to ruminate in it's humor, or ideas, and is the most atypical of the bunch for that reason.

4. “The Ballad of Buster Scruggs” - Now, from here on, I liked the segments quite a bit. I wouldn't be surprised if I ever decided to revisit this, that this would become my second favorite. In a way, it was too polarizing in it's containment that I was unsure how to feel. I felt myself laughing at every laughable moment, I found the sets to be gloriously designed, and beautifully photographed and colored, but then, I also felt an apathetic wallowing towards the talking to the camera, and the too on-the-nose goofiness. The ending was coming without question, which, is serviceable to the point of the entire thing, but I felt unprepared to endure this (the duet did help make it shine, and the theatrical absurdity of it also was beautifully (and boldly) crafted). But still, the singing was great, and it was often hilarious, so this is a great segment.

3. “The Mortal Remains” - Maybe should be number 2? But it's schematic design (whilst never treating it like a surprise), felt too obvious from the word go; if for no other indications, being that Jonjo O'Neill looked like he was trying to be a caricature of The Devil. But here, it was great being able to listen to the Coen's witty dialogue go off in pleasant banter, and having a diversity of characters interact. It felt the most different somehow, and also, the perfect encapsulation of the entire piece. It doesn't have a whole lot to it, and in that simplicity, is something to mull over - the story will live on, even when they don't. I also love the calling out of the connectivity an audience needs for a story, which as time is going on, our minds are collectively expanding, and we don't need to see direct representation to identify and empathize (as a culture), and this feels like their closing a chapter on a part of their career... I just hope it's not the finale.

2. “All Gold Canyon” - Wouldn't be surprised if on a re-watch this one went down. But after the first three left me feeling emotionally confused (especially after Meal Ticket), this felt like the first time I, well, felt something. Tom Waits is perfect as the invading human, ravaging the land, trying to seize himself opportunity. Again, it plays out [roughly] as expected, but there was something hypnotically poignant about watching him prospect for Gold. Also the subtle side story of nature wanting to return to it's natural order, via the invasion of humans; that overarching look at this story as the death of humanity, and how the world will probably return to some kind of better order once it happens. Are the Coen's jealous of the narrative that took place since the 2007 Oscars? With more people coming around to There Will Be Blood being better than No Country? Cause this seems like their version.

1. “The Gal Who Got Rattled” - Seems obvious to me that this is far and away the best segment. It's the most fully formed, that has a narrative arc, and that didn't reveal it's intentions until it was too late. It had actual characterization, brilliantly engaging performances (Zoe Kazan and Bill Heck are sublime), and took it's time to develop a story, that was simultaneously dramatic, hilarious, and romantic, before becoming dour and heartbreaking. I would've traded every other segment to see this fleshed out into its own feature, and that almost is a negative, because it's imbalanced with the rest of the film. As much as I liked my 2-4 spots, this is a whole world better. Coen's could've easily tackled the subject of the Oregon Trail for a feature length, and I'll forever be disappointed they didn't. Though, I will say, the slog that is “Meal Ticket” instantly is worth enduring, just to get to this.

A puzzling piece that never reaches greatness as a whole, and leaves a lot to be desired, even at its best. It is one I will revisit down the line, and has heavily made me want to see the last couple Coen films I haven’t (The Man Who Wasn’t There being top priority), as well as revisiting some old favorites.