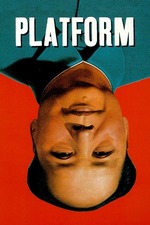 “Seeing only foreign films is a bad influence.”

Uhhh holy shit this was incredible??? I genuinely wasn’t expecting to love this as much as I did. Small towns + road trip + coming of age + theater troupes = made specifically for me.

The lead characters in this are artistically and emotionally stunted by only the oppressive regime they live in, but also by their close-minded parents who shoot down any foe of self-expression from their plays to their clothing (although bell-bottoms are kinda whack, that one dude had a point). The first half of the film they’re just wasting away in this stale industrial town, to the point that they treat a friend who has returned from a trip like the second coming of Jesus. The second half involves them traveling through a culturally shifting mainland China, and at some points it’s absolutely cathartic, and at many times frustrating as the characters change and aspects of the culture changes, but ultimately everything remains the same.

Can’t help but compare this to later stage Edward Yang. The precise wide shots, lack close-ups, intricate but natural looking blocking, slow camera pans and Jia Zhangke just letting his scenes breathe. This type of filmmaking is truly my favorite, it’s able to give realism a true sense of theatricality when done right.

I’ve liked the Jia Zhangke I’ve seen before, but I truly wasn’t expecting to be so affected by this. Really looking forward to the rest of his filmography now.