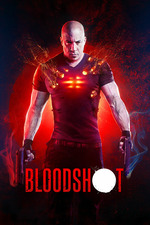 A few of the standouts that made Bloodshot somewhat watchable is the action, and Ray as a character. I like the action because the movie does some cool things with the power to regenerate. The visuals in the action scenes also look pretty good. I also really like the character of Ray, and some of the supporting characters. I think Ray has a lot of potential as a character in the movie. However, that’s pretty much where my enjoyment ends unfortunately.

Ray is way too powerful to be stopped which I think hinders the narrative. Almost everything he faces doesn’t challenge him enough. Therefore scenes are very predictable, and not as exciting. The plot doesn’t increase much in stakes, and as the film progresses, doesn’t become harder for Ray to overcome. If things were harder for him to overcome. Ray would’ve had some emotional moments in between the action because maybe he failed at reaching his goal. Since there weren’t many effective emotional moments in the movie. It becomes difficult to connect to a character that succeeds at almost everything.

Additionally, since Ray is so unstoppable. He doesn’t have much of a character flaw that’s useful in the narrative. Sure, Ray can’t remember his past, which is a great character flaw, but the script doesn’t do much with that information that changes the movie. Basically, the same outcome would have happened without it. Mainly because if Ray has any problem, he can quickly solve it. For example, learning about his wife by connecting to hundreds of online resources to track down his wife could have been an easy solution. However, since Ray doesn’t think of this the story gets stretched out, but that doesn’t mean he can’t do it. In fact, we see Ray use this skill to track down the targets he’s supposed to kill. Why not use that same skill to learn about his wife?

The climax is also very weak because he has a weak antagonist. Ray doesn’t have anyone that can match his power or is a direct opposite to him. Ray needed an antagonist that was going to make things hard for him to get what he wants, but as stated above we know Ray can easily drive through anything. So, the main antagonist really needed some more development here. He comes off very frail, and is quickly defeated. However, if he had the same level of power as Ray or was smart enough to use his power against him. Then, we might have had something exciting. Unfortunately, this build up fell flat.

Furthermore, here are some rapid fire things that could have been improved. The dialogue, Vin Diesel’s performance, character development, character motives, internal conflict, external conflict, meaningful action, a better script, and a better movie trailer. If you watched the trailer. You’ve pretty much seen the movie.

Overall, Bloodshot is packed with action to entertain, but has a forgettable story and an unclear plot.