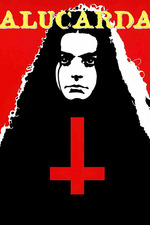 Let's begin with the costumes: the brides of Christ wear outfits like blood-soaked bandages, with the most imminent red like a menstrual stain. Alucarda is draped in funerary black, while Justina and the other girls are more colorful. The doctor is also an imposing, gaunt blackclad figure. He is serious and somber, unlike the strange Roma-caricatures (in greens and other bright colors, typically). It's easy coding for the most part, but the nuns especially stand out. Those costumes suggest so much, from their medical allusions to their distinct evocation of femininity and the mixed symbolism of menses--blessing or curse, female empowerment or fertility, depending on who is reading or writing it.

Then there's the set design. The most notable ones are the tomb, the cavern, the chapel, and the doctor's house. The tomb is almost barn-like, calling back to the birthplace of Alucarda (born in a stable), but with a cobwebbed mustiness typical of graves in horror films. It also evokes, of course, Dracula's castle and other vampiric resting places, of course. The cavern, which I have no better name for, is a cave-like part of the convent that is so incongruous with the fact that it's a convent that I really don't know what to say about it. It's just strange and striking. The chapel, also in a cavernous part of the convent, features a massive alter of candles and a huge statue of the crucifixion, which are central to the best shot in the film--a girl, stretched out on the altar, surrounded by lit candles, the savior hanging in shadow above her. The film is beautiful despite itself. And the doctor's house is a strangely twisted place for the home of a blind girl, a suggestion of paternal disinterest.

What we have is a story that references Carmilla, the Parker-Hume murder case (probably unintentionally), The Exorcist, and more. It is a wailing, hysterical film, a psychedelic horror-melodrama that has no truck with realism or subtlety. It is defiantly anti-authoritarian, irreligious, anti-science, anti-patriarchy, and anti-cruelty all at once. It shows its true colors in a sequence in the tomb, where Justina assaults one of the sisters and is held at bay as the sister prays not for herself, but for Justina to be protected. It is a moment of mercy, compassion, and selflessness, not of sanctimony, not of dominance, not of faith, but of love. And it works, until the doctor's somber masculinity and heartless vengeance end it. In all turns, the authority figures in this are the ones who drive the young girls to darkness and pain, and who create danger for the innocent. The doctor leaves Alucarda with his blind daughter; Alucarda is driven to Satan by the overbearing life of growing up in a convent.