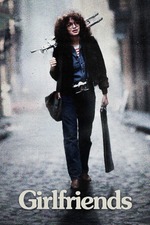 Abortion, adultery, career, romance, art, independence, friendship, sex, sexual health, rent, space, assertiveness, religion, trust, marriage, and sexuality interact in every day moments, small arguments, disappointments, triumphs, deep conversations, quiet conflicts, and chance meetings. The major dramas are largely eschewed. We don't see the weddings, except still images, black-and-white through the character's lens. Her life is in constant collision with reminders of dependence--not community, not in the film's view--and constraint. She navigates, pushing through narrow tunnels of relationships, jobs, roommates, and responsibilities, holding on dearly to what modicum of freedom she can find. This is contrasted, eventually, with one deep bond that empowers instead of stifles, and a bittersweet reunion that illustrates the bond while also reminding that the restrictions women face pull us apart as well (seriously, girlfriend, just fucking dump him).

I have mixed feelings about the one queer character in the film. It doesn't necessarily feel as if the film is condemning her for her queerness (or at all), but she is rather abruptly dropped from the story. It is not an unrealistic moment, but it's still not the strongest moment for queer characters in cinema. Her presence, however, is a step above most films of this era told from a pointedly straight perspective (in that it's about heteroromance/sexuality). The contrast, too, between the conflicts in heterorelationships shown here and the female friendship is noteworthy: when Susasn fights with her boyfriend, it's nearly passive aggressive, irritation, chafing, and when she fights with Anne, it's explosive, emotional, but ultimately cathartic. While the film explores the idea of independence, it recognizes the need for community.

The film also quietly uses Susan's apartment as a symbol of independence. It is most noticeable when she argues with her boyfriend about keeping the apartment, but it's there when she kicks Ceil out, when she redecorates, when she discusses with Anne her plans for it. Her life orbits the apartment. Without much drama, the film illustrates how housing is such a fundamental need. It's more than the roof over her head, it's the proximity to other places (enabling her access to them), the cost of the apartment, and the refuge it provides from the pull of dependence. She keeps it to herself, having only comfortably shared it with Anne. The fact that Anne is the only one who was able to do so reflects the level of trust between them--note that Susan seems to be the first person Anne shares major life events with. This is the deep, empowering bond.

Lupin the Third: The Castle of Cagliostro