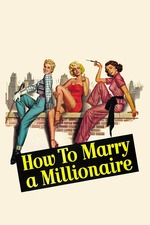 How to Marry a Millionaire

How to Marry a Millionaire 1953

Sexist, obviously, and there's a dream sequence that is culturally insensitive toward the people of Arabia, though I daresay I wouldn't guess which ones specifically the film had in mind. It tries to suggest that money isn't everything, but it doesn't really sell it. But it has a keen eye for color and form that does not stop at sets and costumes, but lingers on bodies--male and female, but mostly female--in a way that isn't exactly enlightened, but is certainly beautiful when taken out of context.

I hit "save" on accident somehow.

To this film's credit, it eventually admits that Marilyn Monroe still looks good even with glasses on. She's playing an unfortunately dim-witted caricature for the most part (and I admit, watching her walk into things made me laugh a lot), though she has a few good moments. Her voice is a rich purr, almost inhumanly soft, and her physical presence is legendary. But as always, her performance stands out as much more capable than she is given credit for.

Another quirk of the film is all of the referential humor, shoutouts to other films of the leading ladies (possibly of the leading men? but I didn't catch any). It seemed unlikely the first time I noticed it, but it got really blatant as Monroe was walking out for the fashion show. It was unexpected, to say the least. (Also unexpected? Learning the symptoms of the measles.)

The other part of this one worth mentioning is Bacall's character's strident blindness. It's one of those awful comedy conventions of someone not believing or understanding a simple fact to build an entire plot on, that is purely frustrating and entirely unentertaining.