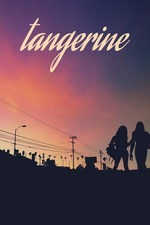 I am often skeptical when actors claim they had significant input into a film, mostly because most major actors are, more than anything, experts at projecting an image, and it is to their benefit and even to the benefit of the writers and directors and so on behind a film to let them take that credit. They are, after all, the face the audience is buying tickets to see. However, some performances are so strong that it's clear that even if the director told the actor every move to make, the actor's skill is what is behind the quality of the performance (think Mifune), and some actors have a public persona that is definitively not the crafted persona of a Hollywood star. This is not to say these actors don't have the charisma, presence, or strength of will to be stars, but that they have some kernel left of sincerity that shines through. That's Mya Taylor.

It's important that she and Kitana Kiki Rodriquez had input into the dialogue and even plot of this film. I've no idea what it would have looked like without their input, but their input gives credibility to the dialogue, which is laden with references to genitalia, transition, misgendering, and more, all in ways that are harsh, unpleasant, and sometimes cheap. A cisgender man putting those words into the mouth of a trans woman would be disgusting; a trans woman of color drawing from her experiences to effect natural, realistic dialogue is simply a concession to reality. Certainly, there are moments in this film that are at the expense of the trans women in it, and certainly, the cisgender character's plot sometimes feels like a concession to cisgender audiences. It's not the perfect transgender transcendence we're still waiting for. But it's still probably the best depiction of trans women I've seen outside of Her Story.

As Willow points out, this film is more document than drama, in a lot of ways. This is informed by the much discussed filming techniques, which leave Los Angeles feeling raw and unadorned, scorching and gritty, yet digitally filtered for the contemporary era. It's often very ugly cinematography, but it doesn't feel contrived, nor shoddy, nor distracting. It's very intentional, emphasizing that any filters used are merely used to encapsulate naked emotions and to counter the sharp humor, to make sure that even when these women are the butt of their own jokes, we are not allowed to think for a second this is anything fairytale or farce. As funny as some may find it, it's still a dose of reality. The emotional impact of the lighting is best seen in the club scene, where Alexandra sings and Sin-Dee watches while Dinah sulks in the background. Sin-Dee rests her head in bright, harsh lights, while Dinah is enshrouded in deep, mournful purple. The song, about growing up and changing, evokes melancholy and wistfulness, and for a moment, these women are not being seen as objects, not fighting, not subject to horrors. It's a scene where a friend listens to another friend's performance, and all of her worries and pain are left in the shadows (in the form of a cisgender woman, no less). The wig scene will probably be cited as the most potent emotional moment, but I will fight for the impact of this moment, with its revelatory illumination and tender acting.

And that's part of what sets this film apart. As much as Sin-Dee and Alexandra talk about their physiques, as much as the film seems to emphasize their progress in transition, it does so mostly through dialogue. When it does visually acknowledge their bodies, it does so usually for a reason other than to show them to be "false," as other films might. Since both characters are sex workers, and as such, their bodies are part of their daily lives. While there are ways to show this without commenting on their bodies (and the film mostly succeeds in not sexualizing them--an impressive feat, considering) or visually misgendering them, and while my dream trans film is avant garde enough to completely eradicate any need for narrative, this film is conceived in a way that leaving out this aspect of their characters would feel like a disservice to the purpose of the film, which is to document the life of trans women of color sex workers (in a funny and touching kind of way).

The film doesn't use its visual storytelling to destroy these characters, even when the opportunity arises. In the bathroom at the club, direct references to genitalia do not include actually showing them (that I could see). During sex scenes, discretion shots are used. The most egregious moment of genitalia obsession involves two cisgender people, and though I felt the scene was probably the worst moment of the film, it ultimately had more to say about the cisgender man than anyone else. The blow job scene at the carwash, meanhile, is played for some nasty visual humor, but it's... not at anyone's expense, really. The joke is a reference to the light at the end of the tunnel, equating with the end of the act, and nothing more. The sound of the carwash and the display of its cascades and brushes distracts from the human action in the scene, though I supposse those without my prejudices might not find it so. It seemed to me that the filmmaker crafted the moment as an earnest depiction of how certain johns treat trans sex workers, but surrounded it in sound and fury so as to alleviate the moment of its potential for the wrong kind of transgression.

Furthermore, the continual discussions of bodies that occur seem rooted as much in the fact that, as trans women and as powerful people in general, both women are comfortable with their bodies. Trans women sometimes have penises; we're still women. It's notable that while both Sin-Dee and Alexandra are subjected to repeated misgendering, they themselves seem confident and undaunted in their own womanhood. The film doesn't take time to analyze or reject every misgendering, and I think it doesn't entirely succeed at keeping an ignorant audience from running with that perception. But the two characters never shudder at the thought of their own bodies; they never struggle with their identities. Partly, this seems to be because their main concerns are not rooted in their being transgender--they are trying to survive, to navigate relationships, and to succeed in art. And, in Sin-Dee's case, to get revenge. No one who is shown to misgender them is shown to be a saint or a voice of reason, but then, no one is shown to be a saint or a voice of reason at all. (Well, maybe the poor Donut Time employee.) Sin-Dee and Alexandra are portrayed as people, as friends, and as women. That's more than so many other media depictions give even white trans women; black trans women are affected by dehumanizing portrayals many magnitudes greater.

Other moments in the film seem to address disparities in gender perception in unusual ways. Most of it is played for humor (the Cherokee passenger, for instance, which is a depiction I have no context to comment on), but some of it is more traditional, such as the undercurrents of patriarchal roles in Razmik's family and the brutality of his wife's defense of his actions ("he provides for our family"). These satellite moments of gender explication seem to exist in order to comment on wider perceptions, as if to suggest that cisgender understanding of gender is far from complete, far from secure, far from accurate. They make no definitive statements, save perhaps in the climatic confrontation in Donut Time, when the emotional value of sex is frankly but insensitively discussed. In this moment, Sin-Dee's journey, driven by her justified anger, has informed our perspective enough that it's impossible (okay, difficult) to side with Chester, Dinah, or Razmik. The arguments that some sexual experiences "meant nothing" or "didn't count" are seared away by the evident power in them to destroy families and friendships. Furthermore, the rejection that eventually occurs in these scenes (of Dinah's point of view, filtered through Chester's [gross] verbal dismissal as much as the reactions of Sin-Dee and Alexandra) settle into the idea that there is value to Sin-Dee's relationship with Chester (to her, anyway) and that the complexities of sexuality aren't restricted to Dinah's scornful homophobia.

Of note is James Ransone's ridiculous character. Ransone plays Chester as a crude buffoon, but there's enough humanity in him to make him more than a caricature or punchline. The reveal of Chester is played in a manner that seems to revel in Ransone's status as the most recognizable actor in the film (other than perhaps Clu Gulagher's baffling turn), making the punchline there a meta-acknowledgment of the audience's assumed familiarity. Basically, film festival goers and Netflix spelunkers are presumed to have seen The Wire, or so it feels. The cockiness and absurdity that Ransone exudes is nothing new for him; the moment plays off his strengths. His performance, which is easy and smarmy, meshes well with Mya Taylor's contained, controlled simmer or Kitana Kiki Rodriquez's mercurial, confrontational boldness. Chester and Sin-Dee collide, and the emotional interplay is unpredictable but riveting.

The confrontation in Donut Time also draws the racial aspects of the film into prominence. From the racism directed at the Donut Time employee from almost everyone involved to the undertones of the mother-in-law's scorn, in this moment, race becomes more than subtext. The ways that race plays into the treatment of Sin-Dee and Alexandra are evident many times throughout the film, and probably at times lost on me many other times, but the careful separation toward the end of the conflict, as Chester and Dinah remove themselves and shift the conflict entirely on the two women of color speaks volumes. Taylor's personal input infuses the film with authority, giving a layer of painful understanding to the story told, and the many ways in which Alexandra and Sin-Dee are mistreated are all revealed to be much crueler in that context.

Tangerine is a film, overall, about exclusion. Every character suffers loss and rejection on Christmas Eve (a layer of context that could easily have been played more hammily; thank the birds it was not), showing how the myriad ways they are wounded and prejudged and spat upon. The traditional communities fail everyone in this film, and in the end, the only connection that seems to unequivocally survive is a friendship between two people who are, possibly, the most marginalized in America. A simple gesture of compassion figuratively burns away the literal piss, revealing in a way where the strength these two women have displayed in the build up came from, showing their naked trans-ness not as a signifier of their falseness but of their struggle, and not one of identity, but against those who would rob them of their identity. It's a wielding of vulnerability in order to create strength, to rebuild a bond that is the core of their strength. I've said before that being transgender is something intrinsic and yet experiential; Sin-Dee and Alexandra are the source of that experience for each other. They recognize in each other the women that they are, and that allows them to ignore those who would insist otherwise. As i watched this film, I felt distinctly uneasy. This is not an easy film for a trans woman to watch, I think, but like so many great works of transgression, it uses the bulk of its discomfitting content to make something beautiful.