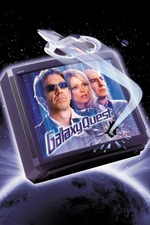 A very funny movie that still gives you the thrill of feeling like you are actually in space. The same compliment cannot even be given to most actual Star Trek films, which is why I’ve heard more than a few times that this is “the best Star Trek movie.” I don’t know if that is fair to say, but I’d personally much rather watch this over most any actual Trek-lore.

Good parody is pretty impossible to find in feature length form, and when it is good, like Airplane (or Scary Movie 3 if you are specifically me), it tends to abandon any true emotional beats in favor of a more formidable joke count. This movie is both effectively parodical and affecting because it never openly mocks the Star Trek source material and, in its final moments, celebrates the model-glueing Trekkies and allows them to save the day.

Beyond all that the jokes are genuinely good, the script is tight, the creatures are interesting, the prosthetics are convincing, the score is playful and moving, the performances are audacious and the the cast is unfathomably stacked.

And beyond all that THAT, this was my most valued VHS as child. It was the only movie with aliens my brother and sister would watch with me. However, it came with the caveat that they would claim that I was like one of Thermians and would imitate “you are our last hope” like it’s how I talked. Baseless but effective sibling bullying.

I wrote this in about twelve
minutes while using the restroom!

The Book of Henry