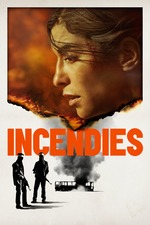 Denis Villeneuve's Incendies tells a remarkable story of a brother and sister's spiritual journey to unearth mysteries their mother left behind, acting as not only a portrait of familial wars, but as a broader commentary on cultural and religious wars. Part of the film is based on the Lebanese Civil War: We see children shooting one another without understanding the cause, families shunning relatives who associate with those of another faith, and acts of brutality in the name of peace. The film eloquently encapsulates the tragic absurdity of extremism when a Christian character sees an approaching bus, believes that it is occupied by Muslims, and quickly replaces her cross with a hijab so that she may board.

It's unfortunate that certain peoples claim to strive for harmony, but do so through violence and ostracism at the behest of dogma, and Villeneuve's film is a relevant depiction of this dreadful phenomenon. I feel that the strong religious thematics overshadow the narrative, which I don't mind, since the latter doesn't emotionally impact me as much as it tries to. In fact, the film's "mystery drama" aspect shouldn't be emphasized over the important discussion it elicits, a discussion about a seemingly eternal human conflict, one that makes Incendies a thoughtful film and Villeneuve's most accomplished to date.