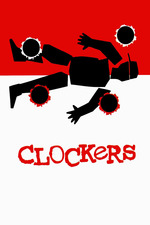 Spike Lee makes films like he's making mix tapes. Each key scene in Clockers, his adaptation of a Richard Price novel about law enforcement and poverty in the age of crack, is set to a different song which shapes the rhythm, tone and pace of the action. They're not the kind of songs you might expect in a mid-90s film about drug dealers, either. Other, more obvious, directors might draw on the then-cresting gangsta rap scene. Clockers goes for Seal. Weirdly, it works.

Clockers was his first attempt to address the drug war in film, having kept it out of Do the Right Thing on the perfectly reasonable grounds that Do the Right Thing has enough to chew on as it is. It was also his first film as a director-for-hire, after Martin Scorsese dropped out to focus on Casino. Wise move: even Scorsese couldn't have imbued the ghetto scenes with as much documentary vigour as Spike does, allowing Malik Hassan Sayeed's cinematography to switch to long lenses and jerky, urgent pans the further it gets into the heart of the poverty and crime it depicts. Scorsese's regular Harvey Keitel has a great role too - and he gets Lee's trademark riser shot! - in a cast of absolute pros: John Turturro, Mekhi Phifer, Delroy Lindo, an unforgettable turn from Keith David.

I've been trying to work out why I find Lee's cinema so irresistible at the moment, after a long period of being cold on him. The simple answer would be that I started watching the right films - Clockers and Do the Right Thing rather than Girl 6 and Oldboy. But I think a large part of it goes back to the music, and the way he allows it to dominate the film's character. These days when I hear people enthusing about the soundtrack to a new film it usually turns out to be the same mix of deep bass noises and atonal cello that has, for this viewer at least, long passed into cliche. Lee's films, in their needle-drops and in Terence Blanchard's moody, emotive scores, feel like their music is pushing outwards, finding new registers of emotion and ambition in the film around them. I like that, and watching them at this current low point for film soundtracks makes me realise how precious they are.