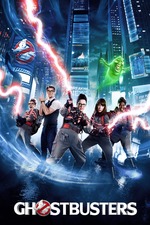 You shouldn't have to talk about fandom, of course. You shouldn't have to earn the right to offer your opinions on movies, and no good movie should be dependent on goodwill ported over from previous source material. It's just that, for me, there is something a bit special about Ghostbusters - the original movies, and the cartoon series spun off from them. The movies were a bit too scary for young me at the time they came out, actually, so the cartoon remains my most purely nostalgic association with the franchise - so much so that my resistance to the idea of a reboot started to erode as soon as I realised Kate McKinnon was basically dressed as a DeviantArt sketch captioned "steampunk Real Ghostbusters Egon Spengler".

What I got from Paul Feig's movie - what I'm delighted to have got from Paul Feig's movie - is a reunion between my childhood and adulthood feelings for the Ghostbusters franchise. It is a different film; no-one's character is analogous to Venkman, Spengler or Stantz, and if you think Leslie Jones's race makes her the Winston Zeddemore of the group you're way off base. But even though the meal is different the ingredients are the same. It inherits Dan Aykroyd's cheerfully dorky love for Forteana (ley lines, EVP and the Ourang Medan are all namechecked), and Melissa McCarthy is a pro at the 120-word-a-minute pseudoscientific classifications of the different ghosts they face. There's also the wistful affection for NYC. Towards the end a massive paranormal event results in all of the city's history co-existing in the same moment, 'Wedding of River Song'-style, and I loved seeing Feig and his set designers express this with billboards for old Boris Karloff and Bruce Lee movies, as well as - a nice comedy-fan touch, this - one for Beyond the Fringe.

There are so many reasons why the people who cut the trailers for this should be shot at dawn, but their most grievous injustice is taking Jones's line about how "I know New York" and making it sound like she's talking about being streetwise, because duh, black. No. Jones's Patty Tolan literally knows New York; she has a working-class autodidact's passion for the city's history that repeatedly gives the three academic members of the team vital information. Feig's movies rarely seem to make good trailers, largely because they're so dependent on team dynamics and cumulative laughs. The scene of McCarthy's possession, another slightly awkward trailer gag for me, becomes much funnier when all that noisy slapping and screaming and flying through windows business is the pay-off to a spooky-funny scene of her acting a bit... off.

Not all of it has been mis-sold. The marketing was right to make space for Chris Hemsworth's Father Dougal-level sweet-hearted idiot Kevin, and it also served notice that Kate McKinnon's Jillian Holtzmann was going to walk away with the film. She is so magnetically spaced-out that you can't quite believe she's been allowed into a summer blockbuster; there are several scenes where she doesn't even speak and still scores the biggest laugh just by reacting. Towards the end she's given a weepy speech about her love for the team, which McKinnon irreverently undercuts by taking her performance to an even weirder level - and as pre-existing fans of her work know, Kate McKinnon's weirdest level makes you wonder if her CV lists her second language as "Earthling".

There's a couple of points of near-sincerity like that - I enjoyed McCarthy's Abby Yates trying to bring the villain around with a "think of all the beauty in the world!" speech so inept that he actually fast-tracks his evil plan in response to it. But there's also one genuinely heartfelt moment from Wiig's Erin Gilbert, a funny actress who I always find even more appealing in straight roles (cf. Whip It). She talks about how she was bullied at school for claiming to have seen a ghost, and as a result spent her whole life pretending to be a skeptic. This despite the fact that her first publication was a book co-written with Abby titled Ghosts from Our Past, Both Literally and Figuratively, whose opening line is "This is not a joke."

We don't get to see much of Yates and Holtzmann's partnership before Gilbert shows up, but we get the sense it was a long extended adolescence. If Gilbert stabilises the team, they allow her to enjoy the obsessions of her childhood in a new way that isn't based around a sense of settling old grievances against school bullies. Compare this to the film's villain, Rowan, a bullied misfit played by the writer Neil Casey with an unnerving, deliberately unfunny spite. Unlike Gilbert, he can only engage with his past as a lost utopia, which leads him to bitter, nihilistic acts of revenge against the whole concepts of time and civilisation. Yet the film pauses to remind us that he's not bad because he was bullied, or because his life didn't work out; every single member of the Ghostbusters team can tell a similar story from their lives.

People are already reading Rowan as Feig and his co-writer Katie Dippold's response to the online backlash, though to be honest that's the least interesting angle for me. Rowan seems to have arisen naturally from the film's refreshing engagement with the whole issue of reboots and nostalgia - through his story, through Gilbert's story, through the whole issue of ghosts from our past (both literally and metaphorically). And it's funny, from the opening scene with In the Loop's wonderful Zach Woods as the world's least reliable tour guide ("Here is the room where P.T. Barnum first came up with the idea of enslaving elephants") to the weirdo riffs which sound merely strange now, but have serious cult-quotability potential ("It's 2040, the President is a plant").

Really, all it had to do was play the intro to Ray Parker Jr.'s immortal theme and there'd have been one moment in there to make me smile. But if Feig's Ghostbusters is about anything, it's about how we should demand more from our nostalgia - and it's this, the cheering sense of watching people with an easy reboot gig actually trying hard, that sent me out on a cloud of summer-movie bliss.