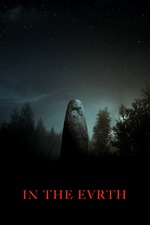 The most tiresome people in any horror movie audience are the people who complain that the characters are making stupid decisions. I was therefore predisposed to like In the Earth as soon as I realised it was designed to shut them up. Whatever the characters in Ben Wheatley's new film do, they haven't done anything as utterly cretinous as go to see a horror movie about a pandemic during a pandemic. That's on you.

In the Earth was shot during the brief break in lockdowns last summer, but the pandemic doesn't affect the narrative all that much. It opens with Joel Fry's scientist Martin passing through a disinfectant checkpoint, and there is a brief mention of a "third wave" which must have seemed nigh-on dystopian back when this was shot. The bulk of the story sees Wheatley collecting some obsessions that must have been simmering while he worked firstly on adaptations, then - as Covid hit - on nothing at all.

It's pretty breathtaking stuff. The obvious comparison is to A Field in England, both for its mushroom-assisted mysticism and bouts of strobe-lit psychedelia, as well as its deeper themes of English identity examined through the lens of a nationwide crisis. Yet A Field in England, for all its impressive qualities, was designed as a goodbye to scrappy, low-budget work before Wheatley made High-Rise. By contrast, nothing about In the Earth seems to be the product of straitened circumstances. It's a remarkably lush film, with its rain-sodden woodlands accented with bursts of red and a colour I can only describe as "ambulance green". Even by Wheatley's usual standards, he's got an enviable group of collaborators here, from the first vibrations of Clint Mansell's score to the terrific closing credits designed by Ghost Box Records boss Julian House.

The ten years since Wheatley's breakthrough film Kill List have seen a lot of films playing around in these folk horror and hauntological areas, and most of them aren't really doing anything other than playing dress-up with robes and animal masks. Wheatley, by contrast, has spent that decade learning more and more about his chosen, er, field. The film begins with a slow zoom through a stone with a hole carved in it, referring to an old British folk belief that looking through such a stone would allow you to see into the fairy realm. There is also a subplot about musical sounds being generated by plants which must have been inspired by Tim Grabham and Jasper Sharp's documentary The Creeping Garden. There is a lot of talk about magic, art and science being different words for the same thing, which might appear trite if the film wasn't clearly inspired by Paul Stamets's concept of the "wood wide web" - a network of interdependent plant, tree and fungi roots so sophisticated it makes you wonder if the ancients weren't on the right track when they believed forests had their own innate spirits.

There is, perhaps, a little too much exposition, but as the paragraph above attests the characters are at least talking about deeply fascinating things. It all makes Wheatley's fondness for John Boorman even more understandable, particularly once Reece Shearsmith turns up as a kind of menacing modern-day Merlin figure. He's terrific, Elloria Torchia damn near steals the film, and of course there's plenty of scares, suspense and gore on top of it. Amidst In the Earth's very complex pleasures, it's nice that he makes space for the simple pleasure of watching someone fall over in the forest and put their hand in a pile of intestines.