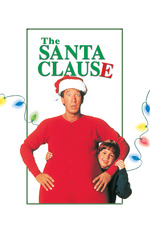 38 year old Scott Calvin (Allen) is spending Christmas Eve with his young son Charlie (Lloyd), splitting time equally between his ex-wife Laura (Crewson) and her new partner Neil (Reinhold). While the celebration doesn’t go according to plan thanks to Scott’s dismissal of the season, that night they are woken by noise on the roof of their house. Investigating, Scott disturbs Santa Claus, causing him to fall from the roof, disappearing into thin air leaving only a set of instructions and the red suit behind.

To satisfy Charlie’s excitement, Scott goes along with wearing the suit and following the instructions which lead to the reindeer and sleigh on the roof. Once he takes a seat, Scott is magically whisked away on a journey to deliver presents around the town before he is taken to the North Pole and briefed on the situation by Head Elf Bernard (Krumholtz).

Waking up the next morning and dismissing the events as a dream, Scott starts a transformation over the year where he gradually becomes the new Santa Claus, complete with big round belly and thick beard and hair. With Charlie trying to help him believe in the magic that has happened, Scott soon discovers the fate of Christmas rests on him accepting his new role and convincing those closest to him that was happened was real, before it is too late…

One of the better mainstream Christmas films to come our way, now 20 years old and still retaining that schmaltzy festive magic, but with a decent story that relies on character, heart and humour rather than truckloads of slapstick and cheap visuals.

Tim Allen surfing the peak of this TV and movie career comes across, to me, a little over-confident in his ability as being funnier than he actually is. While the script isn’t awful, it’s not that funny, but Allen gurns and quips and groans over his puns and silly actions that I think he feels is laugh out loud funny, but really it’s a little cheesy. But with a decent supporting cast with young Eric Lloyd, the always-passionate Judge Reinhold and likeable David Krumholtz as our Head Elf, Allen is in good form all round.

With most of the story set in the everyday community, it gives us lots of comical moments which see Allen slowly transform into our new Santa – this is fun to see and watch him and the people around him try to find explanations as to the increase in weight and excessive facial hair.

With nothing offensive, crude or adult, this is easy festive viewing for all the family with plenty of heart-warming moments that centre on family and relationships, rather than just fantasy and adventure.