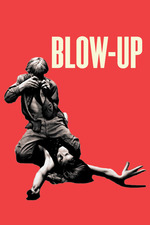 Third viewing, and I'm starting to buy Ronan O'Casey's contention that the film's unintentionally discordant elements—in particular, Sarah Miles' seemingly superfluous presence—are the result of Antonioni deciding to scrap most of the film's plot midway through production. If so, it was a smart move (and of course totally in keeping with his modus operandi; if anything, it's odd that he might ever have considered something so narratively straightforward), though it does result in some frustrating longueurs here and there, involving relationships that seem freighted with terminally vague significance. (I'm thinking in particular of Patricia silently encouraging Thomas to watch her fuck her husband, a scene that I find impossible to integrate with anything else the movie is doing; presumably it had a clearer function at an earlier stage of development, and Antonioni for some reason decided to keep it.) The overall tension between psychology and epistemology, however, is breathtaking. Blowup feints at being, in chronological order (1) a portrait of Swinging London; (2) a character study; (3) a murder mystery; and then (4) a character study again and (5) a portrait of Swinging London again ("From Mimes To Yardbirds: London As The Nexus Of Blah Blah"), only to detonate the whole shebang with the tools of cinema. The sound of rackets hitting tennis balls, gradually escalating on the soundtrack, may be the ne plus ultra of artistic fiat as a statement of principles.