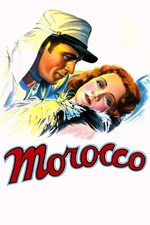 Second viewing, last seen way the hell back in 1992. Either this makes you swoon or it doesn't, and I'm largely impervious, alas. Everything's predicated on an overpowering love that the film simply asserts by fiat, letting joint movie-star charisma do the heavy lifting. This "let icons be icons" approach can work like gangbusters for me in a solo context (see Dishonored), but seems woefully inadequate to convey grand passion; investing myself in romance requires detectable compatibility, not just at-first-sight heavy breathing. Consequently, Morocco only quickens my pulse when Cooper and Dietrich are separated—most notably during the magnificent dinner-party sequence in which Amy faintly hears "Le Boudin" and rushes into the street to search for Tom, oblivious to decorum, even scattering her pearls across the floor to be collected by Menjou's heartbreakingly empathetic fiancé. Indeed, the final half hour or so consists of one theoretically rapturous moment after another, each of which would likely wreck me if I believed for a moment that these two people are more than glancingly familiar with each other. But I can easily see how this is a movie for the ages if one readily accepts Hollywood's traditional romantic shorthand, viz. "they're both hot."