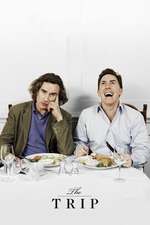 [originally written on my blog]

Here's a case where deliberately blurring the line between fiction and nonfiction proves counterproductive. Coogan and Brydon as "themselves" works fine when they're just riffing on pop culture and poking each other's ostensible sore spots; to paraphrase Steve's Michael Caine, when this movie gets FUNNY, it gets VERY FUNNY INDEED. Trouble is, it also wants us to care about these two guys, as if they were characters in a drama. And I'm just way too conscious that I'm looking at "Steve Coogan" to get all weepy when he has awkward phone conversations with "Steve Coogan's semi-estranged girlfriend" or mopes around "Steve Coogan's enormous but pitifully empty high-rise apartment." (Note that the scare quotes are appropriate even if that really is his girlfriend and his apartment, which I have no idea if they are; doesn't matter.) There's a sort of uncanny-valley effect at work in situations like this: You can't suspend disbelief, as you would were the actor clearly playing a role (even when the role echoes the actor's offscreen persona, e.g. Jerry Lewis in King of Comedy), but neither can you believe that you're seeing even semi-mediated reality, as you might in a documentary portrait. Consequently, bids for pathos just get the < bullshit > cough. (Intrusive woe-is-me score doesn't help, either, and only confirms my sense of Winterbottom as a ham-fisted hack—I'm 1-for-10 with this dude, with only 24 Hour Party People firmly in the plus column.) What The Trip does best, in keeping with its title, is capture the goofy verbal jam sessions that longtime friends inevitably have when stuck in a car for hours on end; some of the bits here (I'm thinking in particular of "Come, come, Mr. Bond" and "Gentlemen, to bed!") work so well in part because they continue long past the point where any self-respecting writer would call it quits, simply because there's nothing to do except exhaust every conceivable permutation of a stupid idea. Well, and because "Steve Coogan" and "Rob Brydon" are just as hilarious as Steve Coogan and Rob Brydon.