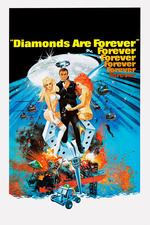 A lot better than I remember, Diamonds are Forever is an absurd delight. While at times marred by overt misogyny, this Bond picture is expertly designed and deeply watchable; the sets are beautiful, the women are gorgeous, the villains are crazy, the action is wild, and Bond is cool as hell. Connery was a brilliant actor and I think the reason why he succeeded so well as Bond was because how much he purposely chaffed against the archetype of the role. Bond was originally British, not Scottish, and Connery, though dapper and elegant in his own way, seemed to deliberately contrast with the poshness of a British gentleman and the high society of England. He gave the role a rough ruthlessness that was most memorable because it didn't fit at all. Talk about casting against type, Connery was exactly that.