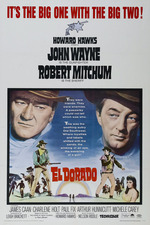 El Dorado is a mostly solid western that features a good cast in good form and a sturdy plot, courtesy of the original version, Rio Bravo; also by Hawks. While I prefer Rio Bravo and despite a somewhat 'been there, done that' vibe to the proceedings, the film is engaging, funny, and charismatic. It's also very well shot and cut with a nice classic Hollywood quality. It's a fairly reliable entertainment and it's a mostly likable movie despite some retrograde qualities.

Also, there's one really racist scene towards the end where James Caan pretends to be Chinese in order to distract the bad guys. I didn't care for that either.